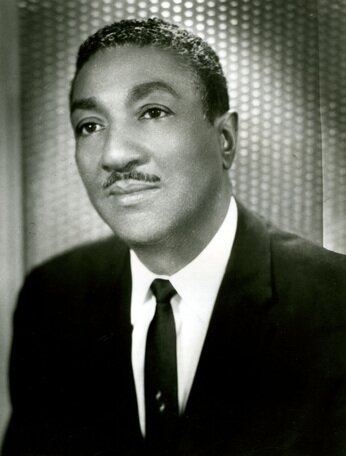 After the war, Ralph returned home to Chicago where he found a job as executive director of the Civil Rights Division of the Mayor’s Commission on Human Relations before Governor Adlai Stevenson appointed him to the Illinois Athletic Commission in 1949. Ralph became interested in politics and rapidly rose from assistant precinct captain to lead the 3rd Ward Regular Democratic Organization. He won election in 1952 to represent the ward in the Democratic Central Committee of Cook County as its Democratic Committeeman. In1955, Ralph ended eight years of Republican representation in the City Council when he was elected to serve as 3rd Ward Alderman.
Alderman Metcalfe built a leading organization, both in vote production and in service to the community.  while grappling with many issues, including crises in education and housing. Chicago’s racial tensions burned white-hot during the 1966 visit by Dr. Martin Luther King, Jr. and the volatile marches of the Chicago Freedom Movement. Under his leadership, the Third Ward Regular Democratic Organization was first to propose naming a street for Dr. King after his assassination.
Later that year, he became the first African American to address a national political convention on television as Chicago police and protestors clashed in Grant Park.The next year ended with a pre-dawn raid in which Black Panthers Fred Hampton and Mark Clark were assassinated by a gang of State’s Attorney and Chicago police as Ralph prepared to run for Congress.
Alderman then Congressman-elect Metcalfe used his good offices to obtain the use of facilities in Washington Park for the DuSable Museum of African American History, the world’s first museum of African American history. The accommodation set precedent: no museum had been granted a lease by the Chicago Park District since the 1930s. The National Museum of Mexican Art, Peggy Notebart Nature Museum, Southeast Chicago Historical Society and Institute of Puerto Rican Arts and Culture followed.